What is a Payment Rail? 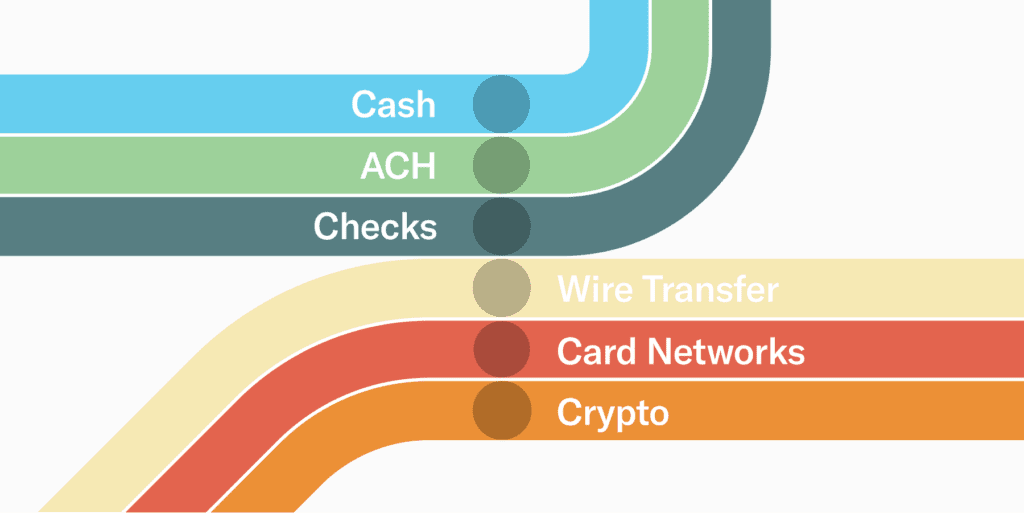 Payment rails are the infrastructure that carry money between a payer and a payee. They connect banks and financial institutions with one-another and allow money to travel between them.

Swift, SEPA, CHAPS, ACH, Faster Payments – just some of the examples of payment rails. But what do they actually do? And why are they important?

What is a payment rail?

Payment rails are the infrastructure that carry money between a payer and a payee. Just like rails for a train, payment rails connect banks and financial institutions with one-another and allow money to travel between them.

However, while you’ll probably use the same rails to travel between two places on a train, there are many options when it comes to payment rails. As such, your business needs to decide which payment rails to use.

Any non-cash payment you make runs on a payment rail, so let’s look at an example of exactly what happens in closer detail.

Imagine you’re a UK business that has just received a bank transfer from a customer in the EU. Both your business and the payee’s bank are in the Single European Payment Area, so the payment is sent from their bank account to yours via the SEPA payment rail. Later you pay one of your suppliers in the US. This payment is sent via SWIFT to the supplier’s account, as both of your banks are part of the SWIFT network. In the evening you send a friend some money you owe them directly from your personal bank account. Because you are both UK bank customers, the money appears in their account almost instantly via the Faster Payments payment rail.

Why are there so many payment rails?

Different payment rails are used for different types of payment, have different geographic focuses or process payments at different speeds. Below, we give you a brief overview of some of the world’s largest payment rails – all aboard!

Faster Payments: The gold standard for UK bank-to-bank transfers, Faster Payments usually settles within a few seconds, though it can take up to two hours. For making rapid payments within the UK, it is unrivalled, although it is limited to payments under £250,000.

CHAPS: CHAPS is another UK system which has several use cases. It is used by financial institutions and very large businesses to settle money market and foreign exchange transactions, and used by other businesses and individuals for high-value transactions such as housing deposits or tax payments. While it isn’t as fast as Faster Payments, payments are usually same day, depending on when they are submitted.

SEPA/SEPA Instant Credit Transfer (SCT Inst): SEPA payments allow businesses and individuals to send money between Euro bank accounts, providing that the country has signed up to the Single European Payments Area (hence the name). This includes all EU members plus eight additional territories. Thanks to SEPA Instant Credit Transfer, payments are now a maximum of 10 seconds.

SWIFT: SWIFT is the Society of Worldwide Interbank Financial Telecommunication and is a way of making global payments to any bank in the world, as long as they are part of the SWIFT network. Unlike Faster Payments and SEPA, SWIFT allows you to pay in a number of currencies, though transactions are likely to take between 3-5 business days and there are potentially higher costs involved.

BACS: BACS is a payment rail usually used for Direct Debits – perfect for businesses that want reliability in receiving regular payments, such as subscription services. Payments will take around three days to clear however, so they’re not quite as quick as other options.

This certainly isn’t an exhaustive list – there are additional payment rails specifically for credit card networks and for peer-to-peer payments. US app Venmo is a popular example, while many countries have their own P2P payments apps.

The newest payment rail is of course blockchain technology, the underlying infrastructure that cryptocurrencies operate on. Payments can be sent around the world very quickly, but blockchains are not currently used for fiat currency (though that may change in the future). Blockchain-based payments are also peer-to-peer, rather than between two financial institutions.

Why are payment rails important?

Clearly different payment rails each offer their own distinct benefits – with settlement time being a key differentiator. As customers, most of us won’t know which payment rail our payments are sent over. But there are plenty of specific business problems that require fast payment processing, which all hinges on the payment rail used. Knowing which rails are best suited for different types of payment can help you achieve that.

We use cookies on our website to give you the most relevant experience by remembering your preferences and repeat visits. By clicking “Accept All”, you consent to the use of ALL the cookies. Read More
Reject AllAccept All
Manage consent

This website uses cookies to improve your experience while you navigate through the website. Out of these, the cookies that are categorized as necessary are stored on your browser as they are essential for the working of basic functionalities of the website. We also use third-party cookies that help us analyze and understand how you use this website. These cookies will be stored in your browser only with your consent. You also have the option to opt-out of these cookies. But opting out of some of these cookies may affect your browsing experience.
Necessary Always Enabled
Necessary cookies are absolutely essential for the website to function properly. These cookies ensure basic functionalities and security features of the website, anonymously.
Performance
Performance cookies are used to understand and analyze the key performance indexes of the website which helps in delivering a better user experience for the visitors.
Analytics
Analytical cookies are used to understand how visitors interact with the website. These cookies help provide information on metrics the number of visitors, bounce rate, traffic source, etc.
SAVE & ACCEPT